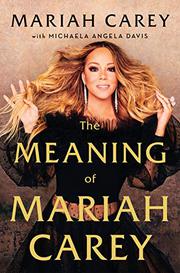 THE MEANING OF MARIAH CAREY

The mega-selling singer chronicles her life via the “moments that matter.”

Carey begins with her early childhood on Long Island in the 1970s, when she used music as a form of escapism and distraction. The fearful youngest daughter of a Black father and an Irish Catholic, opera singer mother, Carey and her two siblings braved physical violence, racial prejudice, and emotional trauma within a turbulent household “weighed down with yelling and chaos.” In the late 1980s, her music career began to blossom, especially after she met and fell in love with Tommy Mottola, who was the head of Columbia Records at the time. Carey openly shares the lurid details of her controlling and emotionally abusive marriage to Mottola in the 1990s. Through her notes on the multifaceted recording process, readers will see the author’s undeniable passion and work ethic as well as her burgeoning self-confidence. Some of the most entertaining moments are encapsulated in dishy free-form anecdotes sandwiched between tales of music career honors, personal triumphs and hardships, and health problems. Carey is at her best when her outspoken personality shines through, as when describing numerous “diva” moments or her harsh regrets about the “collision of bad luck, bad timing, and sabotage” that characterized the making of her disastrous film Glitter. The author also offers appreciative commentary on Marilyn Monroe, Whitney Houston, and Aretha Franklin (“my high bar and North Star, a masterful musician and mind-bogglingly gifted singer who wouldn’t let one genre confine or define her”). Carey frankly reveals the many conflicting emotions she has experienced as a mixed-race woman both energized by and dismayed at the music industry’s cutthroat, often prejudicial landscape. “Lambs,” as her fans call themselves, will find plenty of juicy gems, including the revelation that she recorded a never-released “breezy-grunge, punk-light” album. These intimate ruminations are impressively detailed without being overly concerned with industry gossip or petty squabbles, creating a refreshingly candid celebrity self-portrait. One of Kirkus and Rolling Stone’s Best Music Books of 2020.

100% Mariah, unburdened by filler material and written with pure heart and soul for both die-hard and casual fans.