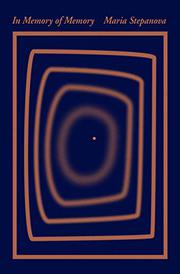 IN MEMORY OF MEMORY

A brilliant evocation of the last years of the Soviet Union, extending deep into the past.

In a work that crosses the boundaries of fiction and nonfiction, Russian poet and journalist Stepanova recounts the lives of her ancestors, rural Russian Jews who, on moving to Moscow, could never quite go home again. She opens with Galya, an aunt whose relationship with her brother, Stepanova’s father, was strained: “There was an uneasiness between the families and a history of perceived snubs.” Galya nevertheless shared with her niece a constantly renovated series of collections, just this side of hoarding, as well as her favorite chocolates; on her death, a vast archive of notebooks, diaries, newspaper clippings, and other such documents that she had assembled to record “the oval shape of her life” and that remind Stepanova of “chain-link fencing” provide clues for Stepanova’s investigations. Alone in Moscow after her parents immigrate to Germany, she attempts to make sense of her family and their stories, some of which emerge from her aunt’s records, others from her own inquiries and travels. At the Holocaust Memorial Museum in Washington, D.C., a curator attempts to shut her down, but she will have none of it: “One of those books where the author travels around the world in search of his or her roots—there are plenty of those now,” he says dismissively of her project. She answers, “Yes....And now there will be one more.” Apart from delivering a mine of family and national history, Stepanova exercises a well-honed sense of the apposite literary allusion (“The chimneys in the view from the window resembled flowerpots, Kafka said something similar about them”). Stretching from the days before Lenin took power to the “Doctor’s Plot” and the collapse of the USSR and beyond, Stepanova’s book is lyrical and philosophical throughout, as when she writes, toward the end, “Sometimes it seems like it is only possible to love the past if you know it is definitely never going to return.”

A remarkable work of the imagination—and, yes, memory.