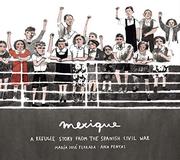 A Refugee Story From the Spanish Civil War

On May 27, 1937, 456 children were evacuated from Spain during the Spanish Civil War. This book depicts their trans-Atlantic voyage to Mexico.

Text and illustrations work hand in hand to tell their story. Adults carrying bundles and escorting children arrive at the port where the children are to embark. As the children board, the adults hug them tight. Through the voice of one of the children, readers learn of their fears and expectations. They see the older ones reassuring the younger ones, especially at night. They observe their songs and games, sad re-creations of the war scenes they have witnessed. They experience the voyage, which never seems to end. And finally the children arrive: “We move forward. We think that the war stayed behind. But it’s not true—we bring the war in our suitcases.” By focusing on the children (all depicted as White) and their feelings, the story of their journey becomes the sad, universal one of so many refugee children past and present. Sepia-toned images with the occasional touch of muted reds convey the grimness of the experience. The afterword informs readers the children arrived in Mexico with the expectation their stay would be short and they would soon reunite with their families back home. Little did they know this would be a permanent exile, and most of them would never see their families again.

Specific yet universal in its narration, this makes the refugee experience accessible to young readers.