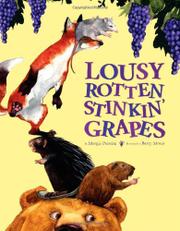 by Margie Palatini and illustrated by Barry Moser

“I am the fox,” proclaims Fox repeatedly. “Sly. Clever. Smart.” Well, no, not so much—as he amply demonstrates in this brisk retelling of Aesop’s “Fox and the Grapes.” Scribbling ever more complex diagrams on a pad as one effort after another fails, Fox proceeds to stack obliging Beaver, Porcupine and Possum atop increasingly exasperated Bear to reach the grapes hanging tantalizingly above. At last he quits in disgust (“They’re probably sour anyway”) and stalks off—leaving the others, each of whom had been summarily cut off in the midst of proposing more feasible ways of getting the grapes, to chow down. Though rendered in fine, naturalistic detail in Moser’s typically accomplished illustrations, the animals roll their eyes and gesture in human ways that underscore the silliness of Fox’s conceit. The moral is not explicitly stated but then, except for readers of Fox’s ilk, it shouldn’t need to be. (Picture book/fable. 6-9)