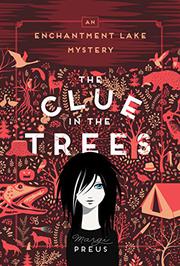 THE CLUE IN THE TREES

From the Enchantment Lake series

Francie is back for another outing in a second mystery set in Minnesota (Enchantment Lake, 2015).

Lots of people in town are aware that Francie played a major role in solving recent murders. Now, as she tries to fit in while starting her senior year at a new high school, she isn’t enjoying her oft–alluded-to Nancy Drew reputation. Her older brother, Theo, makes a surprise appearance; a few years older and not a little mysterious, he’s been absent more than he’s been around. When an archaeologist working on a dig nearby is murdered, Francie discovers clues hinting that Theo may be the killer. Befriended by two theater-kid classmates, Native American Raven and white Jay, Francie and the pair combine forces to solve this new crime, set against the backdrop of the play Antigone, in which Francie’s gotten the lead. (Although Raven’s tribal affiliation is not provided, she says her grandmother is Dakota and takes Francie ricing, a traditional activity among the Ojibwe.) There are plenty of red herrings but a few clues that might steer readers in the right direction. Francie engages in some breaking and entering and misleads the sheriff in her efforts to protect Theo, leaving this remarkably unsupervised teen open to danger and contributing to a rising level of suspense. The mostly white characters are only superficially sketched—the mystery’s the thing.

A great book for a lazy afternoon: a nod to Nancy that serves up a modern version of the classic teen detective heroine.