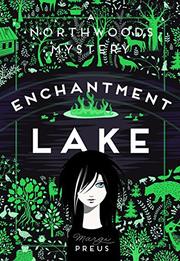 From the Enchantment Lake series, volume 1

Preus, author of the Newbery Honor–winning Heart of a Samurai (2010), is known for her engrossing historical fiction. Now she changes pace and offers a mystery set in the present.

Francie, 17 and fresh off a television gig in which she played a teen detective, is frantically called back to her lakeside childhood vacation home in northern Minnesota. Her two great-aunts, flaky but endearing, who own the isolated cottage, believe someone is murdering their neighbors in an effort to gain access to a large tract of real estate. They’ve represented Francie as a real New York detective, a lie the townspeople somewhat implausibly buy into, and she begins a halfhearted investigation. Effectively combining some mildly scary treks through the dark woods, a growing sense of peril and a dash of romance in the form of handsome Nels, this mystery will keep readers engaged even though it lacks the punch of previous works. The body count is high, but the actual deaths aren’t depicted, minimizing their potential menace. When the truly malevolent surprise perpetrator is finally revealed from among a group of red herrings, the threat is swiftly eliminated; a minor mystery remains unsolved, suggesting the potential focus of the sequel.

Francie may not be a real detective, but she is so confident that there’s never really any doubt of her eventual success, making her good company but perhaps not riveting reading for hard-core mystery fans.