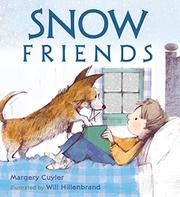 by Margery Cuyler ; illustrated by Will Hillenbrand

Snow is falling. Oscar the dog is ready for Matt, the White boy he lives with, to take him on a walk. Matt promises to do so later, but Oscar runs off. At a pond thick with ice, he meets Daisy, another dog so excited to be outside that she runs from the brown-skinned girl who had been holding her leash. With the action often divided into panels to accelerate the book’s pace, the dogs run and play vigorously in the snow. When Matt—now out of the house, looking for Oscar—and the girl finally locate their pets, they become fast friends, like their two dogs. The story is a pet-centric one: The dogs take the focus, and they don’t have owners. Instead, Matt is referred to as “[Oscar’s] boy,” and Daisy yelps, “My girl!” as she licks the girl’s face. Dog lovers may get a kick out of the way in which the dialogue is written: The dogs’ barks are translated, if you will, into English: “Let’s ice-skate!” yelps Daisy, and “Let’s build an igloo!” barks Oscar (a task they accomplish with ease with neither tools nor thumbs). There is an infectious exuberance underlying the story, one communicated in the opening spread (“Snow! Snow! And more snow!”) with drifts of snow building around Oscar’s house as well as in the tireless, curious energy of the dogs. (This book was reviewed digitally with 11-by-20-inch double-page spreads viewed at actual size.)