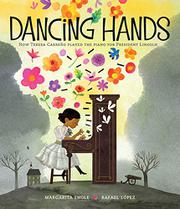 How Teresa Carreño Played the Piano for President Lincoln

Venezuelan pianist Teresa Carreño performs for President Abraham Lincoln amid a raging Civil War in Engle and López’s portrait of an artist.

Thanks to parental encouragement, Teresita learned about “all the beautiful / dark and light keys / of a piano” at an early age. By the age of 6, she composed original songs. Revolución in Venezuela soon drove an 8-year-old Teresa and her family to sail across the stormy sea to the United States, but the Carreño family arrived only to find another violent conflict—“the horrible Civil War”—in their adopted country. Despite the initial alienation that comes from being in an unfamiliar country, Teresita continued to improve and play “graceful waltzes and sonatas, / booming symphonies, and lively folk songs.” The Piano Girl’s reputation spread far, eventually garnering the attention of Lincoln, who invited the 10-year-old to perform at the White House! Yet the Civil War festered on, tormenting Teresita, who wished to alleviate the president’s burdens for at least one night. “How could music soothe / so much trouble?” Half biographical sketch, half wide-eyed tribute, Engle and López’s collaboration endearingly builds to Teresa’s fateful meeting with Lincoln like a gravitational pull, with bursts of compassion and admiration for both artist and public servant. Engle’s free verse whirls and twirls, playful and vivacious, while López’s vivid, colorful artwork elevates this story to heavenly heights.