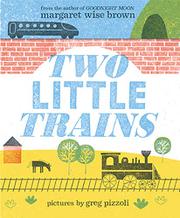 First illustrated by Jean Charlot (1949) and then by Leo and Diane Dillon (2001) and now reimagined by Pizzoli, Brown’s enduring classic follows two distinct trains on their journeys west.

“Two little trains / went down the track, / two little trains went West. // PUFF PUFF PUFF / CHUG CHUG CHUG / two little trains to the West.” Over hills and through rain, snow, night, and wind, the trains—one a steam engine, the other a streamliner—travel. Brown uses onomatopoeia to punctuate the narrative while Pizzoli exploits it to differentiate the two locomotives. He makes every spread a visual play on contrasts, from the different train stylizations and type styles (sans serif for the streamliner’s “PUFF” and serif for the steam engine’s “CHUG”) to the complementary color palettes. The bold illustrations, created with rubber stamps and Photoshop, are done in a simplified style. Accessible, appealing, and understandable, both artwork and text are deceivingly simple, belying the sophisticated nature of each. Lively, rhythmic, and often rhyming text propels trains and readers down the tracks while evocative descriptions work within the confines of a few phrases per page. Skillfully designed and composed, Pizzoli’s cheerful interpretation is thoroughly modern and charming.