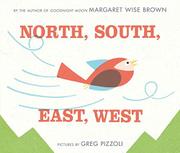 A previously unpublished story from the author of Goodnight Moon takes flight in this poignant, charming picture book.

A little bird readies herself to fly from her nest. From her mother, the little bird learns how to move effortlessly on the wind and avoid storms. In their nest in the sycamore tree, the mother bird sings a song as the little bird asks, “When I fly away, which is best, / North, South, East, or West?” Soon the little bird is off on her own under the light of the sun. She first flies to the North, where chilly white reigns: much too cold to build a nest. The South, with its jumble of greens and flowers, proves too hot. Beside the sea in the West, the little bird remembers the sycamore tree. Clearly, “the East was home.” Unfolding at a gentle pace, Brown’s story ruminates on the idea of leaving—and returning to—home with great compassion. Likewise, the author exposes unspoken depths that make up the parent-child bond, offering nuance and complexity in measured words. Full of simple, curved shapes set in evocative alignments, Pizzoli’s illustrations complement the story well. They’re mostly unadorned and restrained, underlining the strength of simplicity in jump-starting the imagination. A bittersweet ending makes this homecoming feel altogether real.