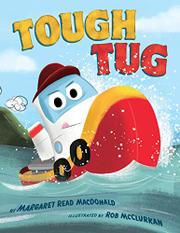 A tugboat’s size and might are easy to anthropomorphize; add this personified puffer to the mix.

Tough Tug is built near Seattle, made of strong steel welded together and adorned with a fresh coat of bright red paint. Wide googly eyes and a determined smile complete the look. On launch day, Tough Tug triumphantly flashes forward and backward, twirling and swirling through the water. Older tugboats (distinguished variously by mustaches, glasses, and eye patches) grumble at the youngster’s bravado. “Push and pull is what tugs do. Practice THAT.” Tough Tug’s first job is to tow a barge to Alaska. Rhythmic mantras churn across the surface of the water in bold navy letters: “Ready, steady. / Steady, ready. // Chug and tug. / Tug and chug.” But Tough Tug is overeager and challenges Arctic Tug to a race. The thrum changes to “Race and run! / Run and race!” Arctic Tug is first to Sitka, but while crossing the open ocean to Anchorage, the older tug gets into trouble. It’s Tough Tug to the rescue! McClurkan’s digital paintings look quite modern, but there is a feel to his foamy waves that recalls the mid-20th-century harbor of Little Toot. The anthropomorphized boats have plenty of personality, and readers who study the expressions on the container ships will be rewarded. An author’s note explains this was inspired by a true story of one tug rescuing another boat from a competing tugboat company.

A brassy, assertive fellow—young readers in the middle of their own power struggles will relate.