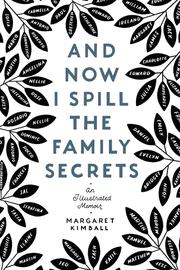 AND NOW I SPILL THE FAMILY SECRETS

“The Secret,” the opening act of the book, pairs a charming illustrative style, marked by bold-line geometries and little handwritten pointers (“Essential sandwich ingredients,” “Weird, secret storage room”), with a startling first sentence: “My mom was thirty-one when she decided to take her own life.” That desperate act sets in motion the collapse of a seemingly ordinary family—though, of course, no family is truly ordinary. Of course, the suicide attempt, born of unsuccessfully managed bipolar disorder, clouded the lives of Kimball and her siblings, who were very young when it occurred. In adulthood, the author has tried to puzzle out events. “What I wanted,” she writes, “is to clear away the muck: to point to a date on a calendar and say this led to that; to watch a video and deconstruct the moments that led to our family’s collapse and its aftermath.” That aftermath included institutionalization, disintegration, and recrimination. As Kimball writes, her sensitivity finely attuned, it took her time to realize that exploring her mother’s psyche would force her still-living mother to “scratch at a wound that’s probably been open since childhood.” Just as sensitively, the author examines the effects of divorce on uncomprehending children and, more damagingly, the endless psychological battles surrounding custody. In the blended household in which she landed, her new family soon “began to splinter along biological lines,” with blood siblings forming alliances in what would become a long cold war. Kimball is never shy to point the finger at herself, recognizing her anger that her mother’s illness forced her to witness “the fact that she transformed from parent to stranger.” The drama grows with the emerging recognition that her mother is not the only member of the family to suffer from mental illness. It’s an extraordinarily honest look at life behind closed suburban doors—and with a sublimely redemptive conclusion.

A welcome debut that will leave readers eager for a successor—and soon.