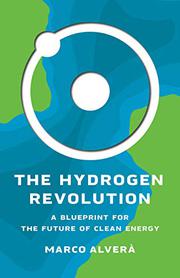 A Blueprint for the Future of Clean Energy

Not another climate change polemic but an enthusiastic argument for hydrogen’s role in reversing it.

In his first book, Alverà, CEO of an energy infrastructure company with natural gas pipelines across Europe and the Middle East, writes a lively account of hydrogen’s chemistry and technical possibilities. The lightest gas, hydrogen occupies the first place on the periodic table. Burned with oxygen, it produces clean heat; its only waste product is water. What could be better? There are a few problems, but many are solved, and Alverà delivers clear explanations of those that aren’t along with an astute analysis of the possibilities. A businessman, he states a blunt fact: Clean energy will not take over until it’s as cheap as dirty energy. That’s less ominous than it sounds. Wind and solar are already cheaper in many areas and expanding rapidly. However, “green electricity, so useful in our homes and in our cars, doesn’t cut it in the manufacturing industry.” It can’t replace chemicals in dirty manufacturing processes, and using electrical heating to reach high temperatures remains too expensive. While wind and solar electricity are always intermittent, hydrogen works all the time. Transmitting power by wire is expensive and wasteful. Pipelines are much cheaper, and existing pipes are already carrying hydrogen, which generates its electricity in fuel cells that are far more compact than batteries. Emission-free cars may be the wave of the future, but their batteries, currently weighing more than 1,000 pounds, can’t scale up to propel long-haul trucks, oceangoing ships, and planes. Regarding cost, Alverà points out that wind and solar became competitive largely because mass production and competition drove the price down. Ten years ago, hydrogen cost $24 per kilogram; today, it’s between $4 and $5.5 per kilogram. The author predicts it will reach $2 within five years, “the tipping point at which it becomes competitive with fossil fuels.”

A surprisingly optimistic case for hydrogen as a source of clean energy.