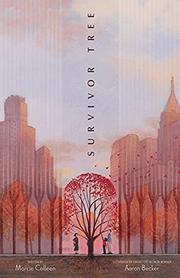 A remarkable tree stands where the twin towers of the World Trade Center once soared.

Through simple, tender text, readers learn the life-affirming story of a Callery pear tree that grew and today still flourishes “at the foot of the towers.” The author eloquently describes the pre-9/11 life of the “Survivor Tree” and its heartening, nearly decadelong journey to renewal following its recovery from the wreckage of the towers’ destruction. By tracking the tree’s journey through the natural cycle of seasonal changes and colors after it was found beneath “the blackened remains,” she tells how, after replanting and with loving care (at a nursery in the Bronx), the tree managed miraculously to flourish again. Retransplanted at the Sept. 11 memorial, it valiantly stands today, a symbol of new life and resilience. Hazy, delicate watercolor-and–colored pencil artwork powerfully traces the tree’s existence before and after the towers’ collapse; early pages include several snapshotlike insets capturing people enjoying the outdoors through the seasons. Scenes depicting the towers’ ruins are aptly somber yet hopeful, as they show the crushed tree still defiantly alive. The vivid changes that new seasons introduce are lovingly presented, reminding readers that life unceasingly renews itself. Many paintings are cast in a rosy glow, symbolizing that even the worst disasters can bring forth hope. People depicted are racially diverse. Backmatter material includes additional facts about the tree.

A lovely 20th-anniversary tribute to the towers and all who perished—and survived.