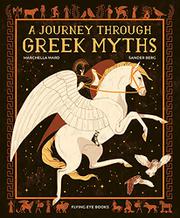 A JOURNEY THROUGH GREEK MYTHS

She doesn’t make much of a case. In a frame story, the myths are retold by an old owl to his granddaughter as a means of demonstrating the importance of keeping promises, being kind to others, thinking ahead, not being arrogant, and battling injustice. How the tales of Cronus’ eating his children and Zeus’ eating his wife Metis, Prometheus’ having his liver torn out daily, the evils bestowed on humanity from Pandora’s jar, Oedipus’ unsuspectingly marrying his mother, the Trojan Horse, the labors of Heracles, and at least most of the rest connect with these values is anybody’s guess. The storytelling leaves something to be desired too, despite occasional flashes of pathos or even humor (the pain of Odysseus and his men in the closed cave is palpable after their Cyclops captor farts with “the sound of a large trumpet and the smell of a thousand dead fish”). Such moments don’t compensate for seemingly arbitrary omissions and truncations. Berg’s painted scenes likewise leave a lot out, but his depictions do edge away from the usual White default to hint at the ancient stories’ multicultural origins. Still, a bland draft next to the ambrosial likes of Donna Jo Napoli’s retellings (2011) or Rick Riordan’s (2014).

Sketchy in logic as well as content—look elsewhere for more robust retellings.