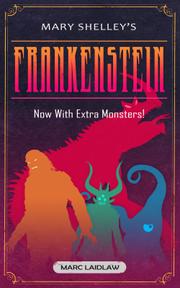 Laidlaw (400 Boys and 50 More, 2016, etc.) revamps Shelley’s horror classic to include a bevy of monsters throughout the entire narrative.

Laidlaw presents readers with an ambitious Minimum Monster Guarantee—“At Least One Monster Per Paragraph,” he claims. He further promises that Shelley’s original text is intact, with all the new material merely additions. While the novel is in the mashup style of Stephen Grahame-Smith’s Pride and Prejudice and Zombies, Laidlaw changes very little of the Frankenstein story. Many references to creatures are superficial, albeit amusing. For example, Victor Frankenstein notes that his love Elizabeth’s illness puts her “in the greatest danger it was possible to be in without a vampire feeding upon her or an alien chest-burster actually shooting out of her breast while she lay abed.” Still, the expanded tale is often humorous, and some of the modifications are outright shocking, including young Felix, who has an affinity for torturing animals. Laidlaw, meanwhile, effectively fuses his voice with Shelley’s. Accordingly, his contribution to the opening of Chapter 10 genuinely sounds like Victor’s woeful narration: “After a morning spent screaming in horror, I spent the following day roaming through the valley.” Monsters don’t make it into every paragraph; readers on occasion will have to suffice with lurid adjectives like “hideous” or the blunter “monstrous.” In the same vein, there are myriad horror films and TV shows cited, which reaches a crescendo in gleeful absurdity when Victor describes a castle as “something out of a Dracula or Frankenstein movie.” This likewise allows for an encyclopedia of horror icons mentioned, from literary (H.P. Lovecraft’s Cthulhu) to cinematic (Godzilla and the Xenomorph aliens). Nevertheless, it’s hard to miss a few inconsistencies. Movie character Freddy Krueger’s name is spelled three different ways, and a pledge to avoid “random obscenities” is contradicted by preceding and subsequent expletives.

Tongue-in-cheek literary amendments, all done without ridicule or a pretense of improving the beloved original.