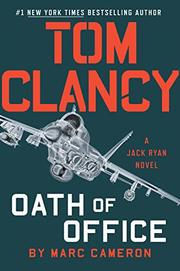 The spirit of Tom Clancy lives on as two generations of Jack Ryans continue to save America’s cookies (Power and Empire, 2017, etc.) in this doorstop-sized thriller.

President Jack Ryan has plenty of domestic problems—flooding down South, an outbreak of flu, faked videos showing him in a bad light, and the hateful Sen. Michelle Chadwick, who spouts dangerous lies about him. Certain Russians want to kill Chadwick and cause Ryan to be blamed. (Ha! As if the Ruskies would ever interfere in America’s business.) Meanwhile, Jack Junior, “the first born son of the immortal Jack Ryan,” is in the middle of the action overseas. An American woman is kidnapped in Cameroon. In Portugal, Junior’s cohort Ding Chavez surveils an “international arms dealer and fat man of intrigue” who is conspiring with the Russians on an incredibly profitable scheme involving nukes for Iran. A Russian aircraft vanishes, probably carrying nuclear material. The story has the staple characters such as John Clark, Ding, and Mary Pat Foley, but more interesting are the lesser folk like Lucile Fournier, the sexy killer and self-described “very nasty woman,” to whom readers had best not get too attached. There is Yazdani, the desperate father of a child with cystic fibrosis, who will trade military secrets for medicine if only he can trust Jack Junior. And Ysabel, who might be the love of Junior’s life if only he had the time. But no one reads Clancy for romance, anyway. Readers want global conflicts, fight scenes, and heroics. The Ryans are the idealized American heroes—they may be imperfect like you and me, but they have no fundamental flaws and even tolerate their haters: “Kindness came naturally to [President] Jack Ryan,” but bad guys “do not want to test me.” Author Cameron’s storytelling is indistinguishable from the late Clancy’s, down to infodumps that bulk up what could be a much shorter novel.

An enjoyable read for Clancy fans.