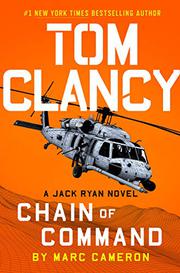 A kidnapping prompts President Jack Ryan to temporarily step aside.

Criminals force “some poor schmuck” to fly his Cessna toward the White House and the Capitol, and a pair of F-16s prepare to shoot him down. So begins a convoluted plot to stop President Ryan from pushing through a Pharma Independence bill vehemently opposed by Indian foreign minister Varma. (Varma vs. Pharma—hmm.) Anyway, the bad guys kidnap first lady Cathy Ryan, and what’s a Clancy thriller without fighting and skulduggery in far-flung reaches of the world, with do-good American doctors who stand to be executed as no-good spies in a part of Afghanistan so remote that even the Taliban doesn’t go there? As fans will remember, Cathy, a world-class ophthalmic surgeon, is the love of the president’s life. Knowing his own deep emotional involvement, he sees the need to temporarily cede constitutional power to the newly minted Vice President Dehart. (VP Hargrave has suddenly died.) Yes, the first lady might not survive—wherever she is—but the president must put country above all else. The plot even includes a possibly rogue Chinese cross-border incursion onto the Roof of the World, a testy top-level chat with China’s president, and an encounter with the Argentine border patrol. And with Aussies and Brits who’ve fought in Africa and who may kill Cathy, the story is like No Continent Left Behind. So yeah, the plot sort of holds together, but wouldn’t stopping the drug bill have been lots easier using the tried-and-true method of buying off a few U.S. senators? As a White House official muses, there’s “no easy explanation for human stupidity—or violence.” In other words, this is vintage Clancy, may he rest in peace, with plenty of fast-paced excitement in locales galore.

Another adventure-packed treat for fans of the Ryan family.