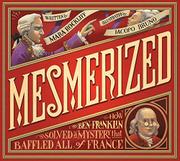 How Ben Franklin Solved a Mystery that Baffled All of France

Ben Franklin’s several years in France during the American Revolution included an occasion on which he consulted on a scientific matter for the French king.

Louis XVI commissioned a study when he became concerned about the number of complaints he was hearing from French doctors about a German—Dr. Franz Mesmer—who seemed to wield a powerful, mysterious method of healing. Among the scientists and doctors asked to report was the American emissary Benjamin Franklin. In Rockliff’s account, Franklin observes Mesmer’s colleague, Charles D’Eslon, at work, then tinkers with Mesmer’s “animal magnetism” technique by blindfolding and misdirecting D’Eslon’s subjects. Franklin’s hypothesis—that results were accounted for by the subject’s imagination and not an external force—is quickly proved. Text displayed in ribbons, a couple of late-18th-century typefaces and other flourishes create a sense of time and place. The endpapers are brightly hypnotic. Bruno’s digitally colored pencil art lightly evokes period caricature and gently pokes fun at the ornate clothing and hair of French nobility. The tale is nicely pitched to emphasize the importance of a hypothesis, testing and verification, and several inset text boxes are used to explain these scientific tools. Rockliff points out that Franklin’s blind-test technique is in use today for medical treatments, and both the placebo effect and hypnosis are studied today.