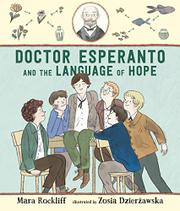 DOCTOR ESPERANTO AND THE LANGUAGE OF HOPE

He lived in late-19th-century Bialystok (then part of the Russian Empire), where a diverse, distrustful population spoke many languages. He believed that a common language could bring everyone together, so he began the task of inventing that language. His first attempts were failures, lacking predictable patterns. Adjusting words that already existed worked better, especially those that had similar construction or sounds and could be put together in a logical structure. But while he was studying medicine in Moscow, his early work was destroyed. With his wife’s help, he began again, revising and refining his concepts. He signed his work “Dr. Esperanto,” his language’s word for “one who hopes.” Eventually, a large group of followers from all over the world came to love this language of peace and honor the person who created it. Rockliff recounts the events simply, focusing on insights into Leyzer’s motives and processes in the construction of Esperanto vocabulary, but much is omitted from the primary narrative. Material in the afterword more clearly explains the development of the language and further relevant details about Zamenhof, including the fact that he was a Jew. Dzierzawska’s digitally assembled pencil-and-ink illustrations complement the text and depict time and setting, also providing visual mapping of vocabulary development. The languages that Zamenhof used as a base for Esperanto are never named in the text or labeled in the illustrations, nor, frustratingly, are the Esperanto phrases translated.

Unusual and fascinating but flawed.