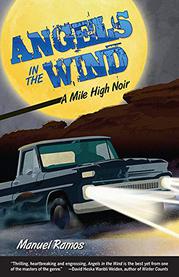 ANGELS IN THE WIND

A family affair takes ex-con private eye Agustín Corral from his Denver home to the East Colorado boondocks of Melton and beyond.

Though he’s only 17, Matías Montoya has already run away from home more than once. But he’s always returned to his adoptive parents, George and Cindy Montoya, after a few days. This time he’s been away for a month. So George’s sister, Essie, calls her cousin Gus to find the boy—or find out what’s become of him. Mat’s troubles clearly began at home. He constantly fought with his father, a veteran with PTSD, and had recently been dumped by his Anglo girlfriend, cheerleader Yvonne Cleary, whose comfortably racist parents were determined to keep Mexican Americans out of their family. On his way out, Mat had left his backpack with self-described writer Wes Delgado, but the backpack has disappeared, and Delgado offers no more help. So Gus follows a lead to The Rising Sun, a shelter for runaways in Pueblo. Toni Marriot, who runs the place, refuses to say anything about the teens who’ve passed through without a court order. Jeannie, another runaway, directs Gus to local fixture Alex Temerio, but Alex merely threatens Gus if he won’t leave town, and two thugs follow up in the dead of night to make sure he gets the message. Despite the formidable forces arrayed against him, Gus uncovers such a web of crime in Pueblo that Mat’s fate comes across as something of an afterthought.