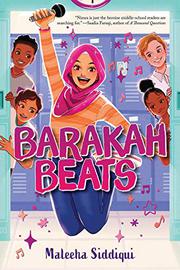 Pakistani American Nimra was home-schooled until she was 8, then attended a private Islamic school where she memorized the Quran, becoming a hafiza. Now her parents have decided that it is time for her to attend public school, where she’ll be with her childhood best friend, Jenna, a White girl. But once seventh grade starts, Jenna ignores and avoids Nimra. Fortunately, Nimra meets other Muslim students: Matthew, a White convert; Bilal and Khadijah, Somali American siblings; and Pakistani American Waleed. When Bilal, Matthew, and Waleed ask her to join Barakah Beats, their Muslim band, she hesitates because of her family’s interpretation of Islamic teachings, which eschews taking part in instrumental music. But she gives in, believing that hanging out with three popular, attractive eighth grade boys will impress Jenna. Her plan to join the band just long enough to regain Jenna’s friendship before dropping out leads to her lying to her parents—and a sticky friendship situation when the boys sign up to perform at a mosque talent show to raise money for refugees. While secondary characters are less well fleshed out, Nimra grows, takes responsibility for her actions, and thoughtfully engages with her faith. Siddiqui has written a sympathetic character who wants to stay true to her beliefs while facing the pressures of school, changing relationships, and diverse beliefs about music within Muslim communities.

An important story about staying true to yourself.