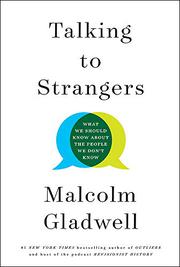 What We Should Know About the People We Don't Know

The latest intellectually stimulating book from the acclaimed author.

Every few years, journalist Gladwell (David and Goliath: Underdogs, Misfits, and the Art of Battling Giants, 2013, etc.) assembles serious scientific research on oddball yet relevant subjects and then writes a bestseller. Readers expecting another everything-you-think-you-know-is-wrong page-turner will not be disappointed, but they will also encounter some unsettling truths. The author begins with a few accounts of black Americans who died at the hands of police, using the incidents to show how most of us are incompetent at judging strangers. Countless psychological studies demonstrate that humans are terrible at detecting lying. Experts such as FBI agents don’t perform better. Judges interview suspects to determine if they deserve bail; they believe it helps, but the opposite is true. Computers, using only hard data, do much better. Many people had qualms about Bernie Madoff, but interviewers found him completely open and honest; “he was a sociopath dressed up as a mensch.” This, Gladwell emphasizes, is the transparency problem. We believe that someone’s demeanor reflects their thoughts and emotions, but it often doesn’t. Gladwell’s second bombshell is what he calls “default to truth.” It seems like a university president resigns in disgrace every few months for the same reason: They hear accusations of abusive behavior by an employee—e.g., Larry Nassar at Michigan State, Jerry Sandusky at Penn State—conduct an investigation, but then take no action, often claiming that they did not have enough evidence of deceit. Ultimately, everyone agrees that they were criminally negligent. Another example is CIA official James Angleton, who was convinced that there was a Soviet mole in the agency; his decades of suspicion and search ruined careers and crippled American intelligence. Gladwell emphasizes that society could not function if we did not give everyone the benefit of the doubt. “To assume the best of another is the trait that has created modern society,” he writes. “Those occasions when our trusting nature is violated are tragic. But the alternative—to abandon trust as a defense against predation and deception—is worse.”

Another Gladwell tour de force but perhaps his most disturbing.