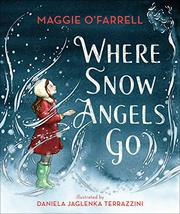 After encountering her snow angel, a little girl longs for his return.

Young Sylvie awakens one night to discover a large, shimmering creature with blue-white skin and enormous, snowy wings in her bedroom. When she speaks to the creature, he’s shocked she can see him. He tells Sylvie he’s the snow angel she created last winter and that he watches over her, returning only when she needs him. The angel discovers Sylvie has a fever, wakes her mother, and vanishes. Sylvie’s ill for many months but remembers everything about her snow angel. When she recovers, she thinks obsessively about him, futilely engaging in risky behavior, hoping to trigger his return. In those times she’s truly in danger, swimming and riding her bike, Sylvie’s convinced her angel saves her. As winter approaches, Sylvie decides everyone should have a snow angel and asks her angel for help. The text and illustrations portray Sylvie as an inquisitive, independent, somewhat lonely White girl fascinated by her majestic, magical, winged male protector who, while constrained by professional protocols and resplendent in sparkling robes, responds sympathetically to her attentions. Using line, color washes, and arresting perspectives, the illustrations in this lengthy picture book deftly convey the realism of Sylvie’s world, the wonder of her snow angel, and the sweetness of their bond in scenes of drama as well as stillness.

An appealing contemporary fairy tale told with humor and warmth.