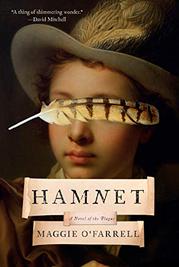 Imagining the life of the family Shakespeare left behind in Stratford makes an intriguing change of pace for a veteran storyteller.

While O’Farrell eschews the sort of buried-secrets plots that drive the propulsive narratives of such previous novels as Instructions for a Heatwave (2013), her gifts for full-bodied characterization and sensitive rendering of intricate family bonds are on full display. She opens with 11-year-old Hamnet anxiously hovering over his twin sister, Judith, who has a mysterious fever and ominous swellings. When Hamnet asks his grandfather where his mother is, the old man strikes him, and as the novel moves through the characters’ memories, we see the role John Shakespeare’s brutality played in son Will’s departure for London. The central figure in this drama is Shakespeare’s wife, Agnes, better known to history as Anne, recipient of the infamous second-best-bed bequest in his will. O’Farrell chooses an alternate name—spelling was not uniform in Elizabethan times—and depicts Agnes as a woman whose profound engagement with the natural world drew young Will to her from their first meeting. The daughter of a reputed sorceress, Agnes has a mysterious gift: She can read people’s natures and foresee their futures with a single touch. She sees the abilities within Will that are being smothered as a reluctant Latin tutor and inept participant in his father’s glove trade, and it is Agnes who deftly maneuvers John into sending him away. She believes she will join Will soon, but Judith’s frailty forestalls this. O’Farrell draws us into Agnes’ mixed emotions as the years go by and she sees Will on his increasingly infrequent visits “inhabiting it—that life he was meant to live, that work he was intended to do.” Hamnet’s death—bitterly ironic, as he was always the stronger twin—drives the couple farther apart, and news of a new play called Hamlet sends Agnes to London in a rage. O’Farrell’s complex, moving finale shows her watching the performance and honoring her husband’s ability to turn their grief into art.

A gripping drama of the conflict between love and destiny.