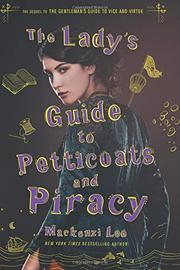 THE LADY'S GUIDE TO PETTICOATS AND PIRACY

From the Montague Siblings series, volume 2

Felicity Montague fights to take up space in a world that demands she remain invisible.

Barred from study at hospitals and universities because of her sex, Felicity chases her dreams of medical study from London all the way to Stuttgart, where her idol, Alexander Platt, an expert in preventative medicine, plans to marry before embarking on an expedition. Without any money of her own since she ran away from home, white English girl Felicity must rely on Sim, an Algerian Muslim woman with connections to piracy and secret motives. To make matters worse, Platt’s fiancee, Johanna Hoffman, also white, used to be Felicity’s best friend until falling out over their changing interests. As in The Gentleman’s Guide to Vice and Virtue (2017), Stonewall Honor recipient Lee (Bygone Badass Broads: 52 Forgotten Women Who Changed the World, 2018, etc.) develops a world rich in historical detail, crafts a plot wild with unexpected turns, and explores complex topics like colonization and identity. Felicity’s brother, Monty, and his boyfriend, Percy, play smaller roles in this volume; the story focuses on the relationships between Felicity, Sim, and Johanna as the three women fight their own battles for respect and recognition within societal systems built to suppress them. Traveling alongside Sim and Johanna challenges Felicity to acknowledge the flaws of her not-like-other-girls self-image and realize that strength comes in more than one form.

An empowering and energetic adventure that celebrates friendship between women.