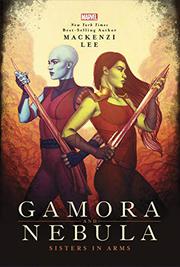 From the Marvel Universe YA series, volume 2

Estranged sisters Gamora and Nebula race to retrieve the heart of a dying planet, guided by forces beyond their knowledge.

Lee’s latest explores a turning point for two of the Marvel Universe’s most complicated figures. Green-skinned mercenary Gamora sells her skills and connections to the highest bidder—which is usually her father, Thanos. He’s manipulated and pitted his adopted daughters against one another for years but always favors Gamora, leading blue-skinned Nebula to make increasingly desperate attempts to prove her worth; recently, she lost an arm for her trouble. Practical, efficient Gamora doesn’t dwell on the rivalry with her sister: She’s had little reason to doubt their father’s methods or motivations. Gamora’s latest assignment is on Torndune, a once-verdant planet that’s been ravaged for its subterranean deposits of Crowmikite, a valuable energy source. She doesn’t know she’s been followed there by Nebula, who’s also in pursuit of Torndune's heart and who possesses critical information about Gamora’s mission. Everything changes when the sisters reconnect in the midst of a rebellion against the powerful entities who profit from Torndune’s natural resources and discover just who hired Gamora—and why. Gripping and well-choreographed fight sequences—both physical and verbal—establish each sister’s strengths and weaknesses and foreshadow a final confrontation. Transcripts of a chaotic meeting between the Grandmaster and several guests punctuate the sisters’ alternating perspectives.

Come for the action, stay for the emotional depth.