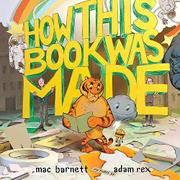 HOW THIS BOOK WAS MADE

A book tells the story of how it was made.

It all starts, of course, with an idea, which strikes Barnett while arm-wrestling a tiger. An initial “bunch of words on paper” goes through draft after draft, then finally the 21st version is sent to Barnett’s editor (“like a teacher, only she works in a skyscraper”; she’s white, as are Barnett and Rex). The negotiation between author and editor covers several pages (and “most of the United States,” as dashed lines traverse the country, representing the back and forth). Finally, illustrator Rex receives Barnett’s words, and here hysterical vignettes depict Rex sleeping and goofing off as the text says, “he must have been working very hard.” At this point, the book starts to go off the rails, informing readers without explanation that even though it would be faster to print it in the United States, the book goes to China for printing. Then it really gets silly. First there’s a pile of books so large it’s visible from space (an ironic comment on small print runs that will mystify young readers), and then several pages of sheer looniness involving pirates and an eagle, among others, pad the story before readers finally finish it—which completes its creation. Rex’s mixed-media illustrations keep up with the text and pack in plenty of chuckles, but sadly, the verbal embroidery obscures a topic kids might be genuinely interested in.

Too funny for its own good.