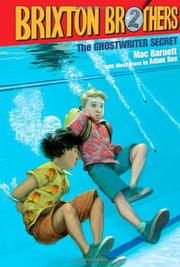 From the Brixton Brothers series, volume 2

Partially thanks to his solving The Case of the Case of Mistaken Identity (2009), 12-year-old Steve Brixton has been able to start his own detective agency. Now he’s a real sleuth like his heroes, the fictional Bailey Brothers, no matter what his mother’s lame, cop boyfriend Rick might say to the contrary. Steve gets a call from Victor Fairview, the richest man in Ocean Park, Calif., when Fairview’s red diamond goes missing. Steve solves that case in less than an hour despite Rick’s interference. While charged with guarding the diamond, Steve gets a letter from his idol, MacArthur Bart, author of the Bailey Brothers books. Bart needs Steve’s help! With best friend Dana in tow, Steve sets out to find Bart. Can a detective weaned on a couple of 1950s Hardy Boys clones solve a case with more twists than a…a really twisty thing? Barnett’s second Brixton Brothers mystery continues the whimsically sardonic adventures of everyone’s soon-to-be-favorite clueless-yet-earnest boy detective–wannabe. Shot through with moments of goofiness and dotted with Rex’s black-and-white illustrations, this is sure to please existing fans and win new ones. (Mystery. 8-12)