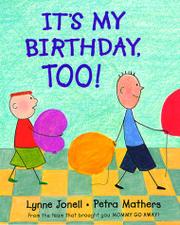 IT'S MY BIRTHDAY, TOO!

From Jonell and Mathers (I Need a Snake, 1998, etc.), an immensely appealing story of brotherly dynamics, and the sparks they throw off. Once again, the artwork is a major player, showing Christopher, the older brother (whose birthday it is), with stick arms and legs, and an egg-shaped head; and Robbie, the younger boy (whose birthday it isn’t), with similar arms and legs and a round head topped with an orange pat of hair. Christopher doesn’t want Robbie at his party; Robbie retaliates by saying that perhaps he won’t be Christopher’s brother anymore. Christopher’s declaration that he’d rather have a puppy produces Robbie’s offer to be that puppy. But when too much doggy behavior earns a disparaging comment from one of Christopher’s friends, the older brother rescues the younger. It’s all familiar but lovely in this format—boiled down to the essentials and gleeful in its simplicity. (Picture book. 4-8)