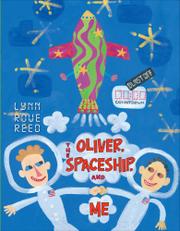 OLIVER, THE SPACESHIP, AND ME

Carter is miffed when his best friend, Oliver, chooses someone else to go to the planetarium on his birthday. After all, they were planning on being best astronaut friends in the future. So Carter decides to build a spaceship, and phooey on Oliver. Reed’s razzmatazz mixed-media artwork, with its juicy, funky acrylics and boldly incorporated photographs, floats the project as it flows from engineer to sheet-metal worker, welder, plumber and electrician. By now, readers could easily have forgotten about Oliver—a rather flimsy pretext for launching the project, anyway—except his little head keeps poking up on each page. But Carter is too involved in the job to notice. It is gratifying to watch the ship take shape and for young readers to meet such working folk as Mr. Cutler the sheet-metal worker and Ms. Joiner the welder. When Carter chooses Oliver for the inaugural flight (though he’d kinda-sorta promised that to his generous helpmates, but forgot there were only two seats), it’s a nice gesture, but doesn’t exactly—or even remotely—have anything meaningful to say about friendship. (Picture book. 5-8)