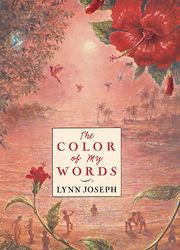 THE COLOR OF MY WORDS

This standout novella lustrously portrays Ana Rosa and the rich simplicity of her family’s daily life in the Dominican Republic. The linked vignettes and elegant prose vitalize the merengue music, colorful houses, as well as the people’s poverty and the tyranny of the government. Each chapter begins with one of Ana Rosa’s lovely rhythmic verses. A poet and writer at age 12, she steals bits of paper to record everything she sees, hears, and imagines. Ana Rosa’s family is very close by necessity, but it is her beloved brother Guario who has the job that supports them. As the novella proceeds, dark shadows begin to slink through the gentle days. We learn that Ana Rosa’s father drinks too much rum and Coke, especially on Sundays, when he becomes a lurching spectacle. Then an official informs the villagers that to build a hotel, the government has sold the land on which their families have lived for generations. The villagers band together, Ana Rosa writes an article, and her brother Guario becomes their passionate leader. But when the day of the standoff arrives, the villager’s words and rocks are nothing against the guardia’s guns and bulldozers. The heartbreaking result is Guario’s death. Without diluting the sorrow, Joseph (Fly, Bessie, Fly, 1998, etc.) illustrates the good arising from the tragedy as the government cancels the hotel project and Ana Rosa begins writing the life of her brother. This is an achingly beautiful story that will awaken profound emotions in the reader. (author’s note) (Fiction. 8-11)