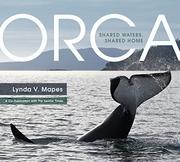 A beautifully illustrated scientific, political, and humanitarian study of the threat posed by human encroachment to an iconic species of the Pacific Northwest.

In 2018, the eyes of the world were riveted on a real-life nature drama as Tahlequah, a female of a pod of orcas, carried her dead calf hundreds of miles through the waters of the Salish Sea in a public display of maternal grief that lasted for 17 days. Tahlequah’s tragic vigil, along with the nearby death of Scarlet, a newborn orca, from a mysterious wasting syndrome, highlighted an ecological emergency that threatens both the orcas and the chinook salmon they feed on. Indigenous nations have, historically and currently, revered the orcas as family, but White settlers in the United States and Canada have been more likely to slaughter them or capture them for display and amusement. In this book, co-published with the Seattle Times, Mapes, a Seattle Timesreporter on the environment, presents a compelling portrait of the orcas as creatures of dignity and sensitivity, with brains that are better structured for empathy and social interaction than humans’. No less impressive are the orcas’ prey, Mapes notes—the “lustrous,” ancient, and resilient chinook salmon, whose already perilous journey upstream to spawn has been rendered nearly impossible by human encroachment. Pollution and noise damage the orcas, the author points out, and interfere with their ability to hunt. Illustrated with charts, diagrams, and spectacular photos by Seattle Times photographer Ringman and others, Mapes’ vigorous, evocative writing draws readers into the intertwined story of the orcas and the chinook and also effectively highlights Indigenous stewards of the land and sea, including members of the Lower Elwha Klallam Tribe. She explicitly charges that “it is our everyday destruction and pollution of the habitat that supports the orcas—and the salmon they eat—that is the major cause of the orcas’ decline.” However, Mapes also offers cautious hope in her account of the restorative effects of dam removal on Washington state’s Elwha River.

A compelling and troubling examination of the imperiled state of two important marine species.