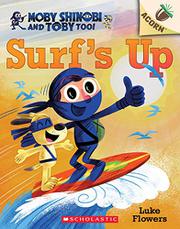 From the Moby Shinobi and Toby, Too! series, volume 1

Moby’s sidekick dog “Toby wants to play in the sun. / A beach visit would be fun!” Ninja Moby indulges Toby’s request, packing both beach and ninja items before setting out for the “Beach Bash!” Simple rhyming couplets and plenty of action follow as each brief chapter showcases a new problem for Moby. In “Sun and Sand,” his friends ask for assistance to place the final flag atop their impressive competitive sand castle only to be sabotaged by a snappy crab. In “Catch of the Day,” a fisherman on a pier recruits Moby to pull in a catch only to be entangled in lines and confusion. Moby later goes “To the Rescue” of a mariner whose sailboat is sinking. Following suit from previous books, Moby often creates a comical catastrophe before ushering in a creative solution. Bold illustrations layered with bright colors and textures are combined with oversized cartoon facial features. The combo heightens the lively plot, especially during the monosyllabic action sequences in each vignette: “TWIRL! / TOSS! / BOINK! / PLOP!” Light-skinned Moby may be equipped with and dressed in ninjutsu attire, but diversity is shown with a single brown-skinned friend and other background characters.

A high-interest venture for the early-reader audience.