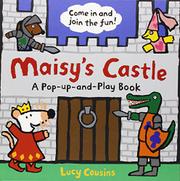 A relatively sturdy pullout castle with a die-cut drawbridge and a dragon in the cellar serves as playscape for punch-out figures of medieval Maisy and her friends.

The dramatic main event follows a perfunctory scenario in which Maisy welcomes “Sir Charley” the crocodile and others to a bit of archery practice, then dons armor to win a friendly joust “by one point.” Even toddlers-at-arms (with minimal assistance from a yeoparent) can follow the easy instructions to set up the castle and brace it. The card-stock punch-outs include four characters in period dress, two rideable destriers and, oddly, a cannon. These can be stored in an accompanying pocket when not in use—or even dispensed with entirely, as the castle is not only festooned with busy guards and other residents, but there is lots of (literal) monkey business going on. Along with sending Maisy further from her customary domestic settings than usual, this outing features a possibly discomfiting quantity of weaponry—none seen actually in use, but still adding an unusually martial note to a series that generally promotes more peaceful pursuits.

Just a bit of well-armed fun, more suitable formatwise for a gift than classroom or library shelves.