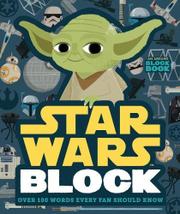 Over 100 Words Every Fan Should Know

From the Block Books series

by Lucasfilm Ltd. ; illustrated by Peskimo

A compendium of people, places, and things found in the Star Wars movies.

After a brief two-paragraph introduction resembling the movies’ iconic text crawl, readers meet a variety of characters, from The Phantom Menace to The Force Awakens, with a nod to Rogue One. As with other Block Book titles, this is organized in sequences of double-page spreads. The first spread shows a close-up (BB-8, for example), with the recto’s edge cut to outline it. On the following pages, the camera pulls back to a scene with other characters (Unkar Plutt, a happabore) and their vehicles (a speeder) or accessories; an icon with the planet’s name (Jakku) floats against the scene. While the shaped pages provide some page-turn ease, the visuals and text from the next spread peek through, to sometimes-confusing effect; Han Solo looks as if he is as large as the Millennium Falcon, for instance. Peskimo’s illustrations are the stars here, creating friendly heroes and softening the villains (particularly Darths Maul and Vader) with swaths of flat, muted, subtly textured colors. A final double gatefold shows sundry villains all captioned “Fear,” while the inside, labeled “Hope,” presents a gallery of human, alien, and droid heroes. Here’s hoping the 2-inch-thick binding will hold up to the enthusiasm of young fans.

The book demands familiarity with the films; the youngest Star Wars fans will find much to pore over.