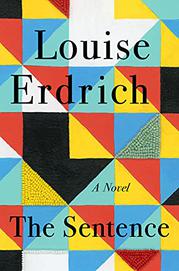 The most recent recipient of the Pulitzer Prize in fiction—for The Night Watchman (2020)—turns her eye to various kinds of hauntings, all of which feel quite real to the affected characters.

Erdrich is the owner of Birchbark Books, an independent bookstore in Minneapolis and, in this often funny novel, the favorite bookstore of Flora, one of narrator Tookie’s “most annoying customers.” Flora wants to be thought of as Indigenous, a “very persistent wannabe” in the assessment of Tookie, who's Ojibwe. Flora appears at the store one day with a photo of her great-grandmother, claiming the woman was ashamed of being Indian: “The picture of the woman looked Indianesque, or she might have just been in a bad mood,” Tookie decides. Flora dies on All Souls’ Day 2019 with a book splayed next to her—she didn't have time to put a bookmark in it—but she continues shuffling through the store’s aisles even after her cremation. Tookie is recently out of prison for transporting a corpse across state lines, which would have netted her $26,000 had she not been ratted out and had the body not had crack cocaine duct-taped to its armpits, a mere technicality of which Tookie was unaware. Tookie is also unaware that Flora considered Tookie to be her best friend and thus sticks to her like glue in the afterlife, even smacking a book from the fiction section onto the floor during a staff meeting at Birchbark. The novel’s humor is mordant: “Small bookstores have the romance of doomed intimate spaces about to be erased by unfettered capitalism.” The characters are also haunted by the George Floyd murder, which occurred in Minneapolis; they wrestle with generations of racism against Black and Indigenous Americans. Erdrich’s love for bookselling is clear, as is her complicated affection for Minneapolis and the people who fight to overcome institutional hatred and racism.

A novel that reckons with ghosts—of both specific people and also the shadows resulting from America’s violent, dark habits.