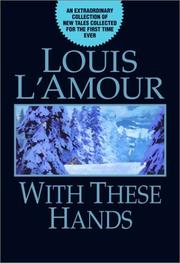 The final volume in a series of four posthumous titles (Beyond the Great Snow Mountains, 1999, etc.) collecting tales never before published in book form, many in genres we don’t associate with the Western writer.

L’Amour (1908–88) came from pioneer stock and traced his family back to 1600. Before committing fully to a writing career in his mid-’30s, he led a vastly adventurous life. He sailed around the globe, was shipwrecked in the West Indies and stranded in the Mojave Desert, worked as a miner, lumberjack, cattle skinner, carnival barker, elephant handler, and a boxer (winning 51 of 59 fights); during WWII, he served as an officer in the Transportation Corps. Included herein is the ferocious boxing saga “Gloves for a Tiger,” the second short story he sold. Also here are the wrap-ups for a number of early series clearly from his pulp days, although no provenance is given for any story. (Those interested can turn to louislamour.com for more information.) L’Amour is still finding his voice in many of these fictions, which echo genre styles of the day. For instance, in “Corpse on the Carpet,” his lengthy LA thriller about detective-to-be Kip Morgan: “She was sitting just around the curve of the bar, a gorgeous package of a girl, all done up in a gray tailored suit.” It’s pulp, but it’s catchy pulp; flurries like “I’d thrown my Sunday punch and all I got was rebound” keep readers lost in a hardboiled, lobster-bright time-warp filled with phrasings now as formal and stately as harpsichord notes from an 18th-century drawing room (“I whipped my right up into his solar plexus”). The lone Western, “Six-Gun Stampede,” is voiced in that “Anyways, I’m just fixin’ dinner” coziness. Far stronger is the title story, a Jack London–ish man-against-nature classic, telling of an oil company executive crashing in the Arctic wastes.

The Ghost writes on. Wonderfully.