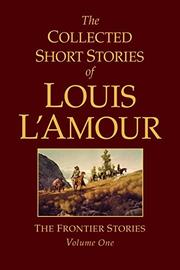 The Frontier Stories: Vol. I

The first anthology in a series gathers frontier stories by the superbly stylish late L’Amour.

Winner of the Presidential Medal of Freedom and of the Congressional Gold Medal, L’Amour wrote 90 novels and 26 collections of stories, aside from nonfiction, a memoir, and a volume of poetry. His recent four volumes of posthumous titles, capped by With These Hands (2002), are now followed by Volume One of his frontier stories, with 36 entries, the first volume of reissues of his complete short stories by subject matter. As it happens, all 120-plus of his books are still in print and have sold 270 million copies worldwide, with 45 of his novels and stories filmed by Hollywood or television (rent John Wayne in Hondo for one of the best), altogether seemingly a record unmatched by any American writer in any genre, living or dead. The new series kicks off marvelously with “The Gift of Cochise,” a tense, white-lipped, double-barreled story about a frontier mother facing down a band of Apaches led by Cochise. Library of America, eat your heart out.