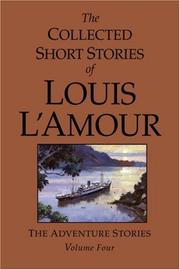 From the 1920s to the ’40s, L’Amour wrote great numbers of magazine stories, glad to find a serial that paid on acceptance, even when the publication was a little risqué. (Of one magazine he writes, “It pays rather well but is somewhat sensational. The magazine…is generally illustrated by several pictures of partially undressed ladies, and they are usually rather heavily constructed ladies also.”) This volume, part of an ongoing project to collect L’Amour’s scattered serial publications, gathers pieces that likely otherwise would have been lost, published in long-extinct magazines such as 10 Story Book and Thrilling Adventures. As L’Amour’s son Beau writes in the afterword, L’Amour worked under the influence of Jack London, Eugene O’Neill and John Steinbeck, and these tales are marked by a kind of bare-chested realism that is not without its poetry (“I’d had my share of the smell of coal smoke and cinders in the rain, the roar of a freight and the driving run-and-catch of a speeding train in the night, and then the sun coming up over the desert or going down over the sea, and the islands looming up and the taste of salt spray on my lips and the sound of bow wash about the hull”). The realism gets a touch less believable with a nicely plotted sequence of stories surrounding “pirates with wings” Steve Cowan and Turk Madden, soldiers of fortune loyal to nothing but the American way of life, with a talent for operating knife and machine gun, and with a definite dislike for the “sons of Nippon.” Literary archaeologists will prize this sequence as an insight into the American mindset at the time of World War II. L’Amour was not a consciously literary writer, not by any stretch, but with a little fine tuning, his story “The Man Who Stole Shakespeare” could pass for Borges. In all events, the stories are more than competently rendered, and fuel for a hundred old-timey Buster Crabbe serials.

Potboilers, to be sure, but good fun, and just the thing for fans of L’Amour’s better-known Westerns.