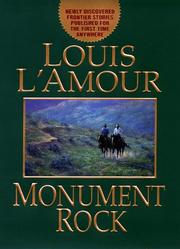 The late (d. 1988), leathery, awesomely unstoppable (over 100 books still in print) L’Amour, still producing fluently from his grave (End of the Drive, 1997), offers one more gathering of unpublished tales, proving again that great writing laughs at death. Showing sheer contempt for slow openings, L’Amour’s seven newly discovered short stories offer some breath-catching first paragraphs echoing with the cold steel click of a Colt .45 hammer being cocked. The lead story, “The Man from Utah,” polishes L’Amour’s walnut prose to its glossiest grain. Bearing a fearsome reputation as a gunfighter, Marshall Utah Blaine arrives in Squaw Creek to investigate 14 recent murders (three were marshals) by a cunning bandit masquerading as an upright citizen. By a process of deduction, the shrewd Blaine narrows his suspects down until he has the killer. “Here Ends the Trail” opens with a High L’Amouresque Miltonic Inversion: “Cold was the night and bitter the wind and brutal the trail behind. Hunched in the saddle, I growled at the dark and peered through the blinding rain. The agony of my wound was a white-hot flame from the bullet of Korry Gleason.” This builds to an explosive climax that mixes vengeance with great-heartedness. “Battle at Burnt Camp,” “Ironwood Station” and “The Man from the Dead Hills” all live up to the melodrama of their blue-steel titles. “Strawhouse Trail” opens memorably with the line: “He looked through his field glasses into the eyes of a dying man.” And never lets up. The title novella tells of Lona Markham’s unwilling engagement to six-foot-five, 250-pound, harsh-lipped Frank Mailer, who has “blue, slightly glassy eyes.” Will Lance Kilkenny, the mysterious Black Rider, save her from indestructible Mailer? Stinging stories of powerful men against landscapes you can strike a match on.