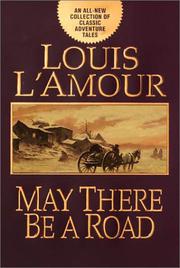 MAY THERE BE A ROAD

The third posthumous sheaf of short stories from L’Amour (Beyond the Mangrove Swamp, 2000, etc.), with still a fourth promised for next year. The bestselling author “wanted to write almost from the time I could talk”—and apparently did, with more than 100 books still in print. The present collection holds L’Amour’s second and third professional sales (hard-boiled boxing yarns “The Ghost Fighter” and “Fighter’s Fiasco”); the title story, about Red China invading Tibet, was turned down by the Saturday Evening Post in 1960, then shelved. Daughter Beau L’Amour updates work on her dad’s biography and lists several dozen acquaintances of his she’d like to hear from. When Dad was hard at work, she tells us, he often turned on a dime into a new story while writing the first. The Ghost walks.