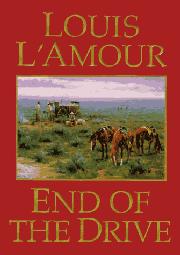 END OF THE DRIVE

The late, great, vastly prolific L'Amour (Jubal Sackett, 1985, etc.) rides again, with a recently discovered never-before-seen novella and sheaf of stories. Most of the tales feature Homeric diction and wonderful hooks. ``Caprock Rancher'' begins: ``When I rode up to the buffalo wallow, Pa was lying there with his leg broke and his horse gone.'' ``Desperate Men'' opens with: ``They were four desperate men, made hard by life, cruel by nature, and driven to desperation by imprisonment. Yet the walls of Yuma Prison were strong and the rifle skill of the guards unquestioned, so the prison held many desperate men besides these four. And when prison walls and rifles failed, there was the desert, and the desert never failed.'' That's a big, gritty voice at work, lifting melodrama to the heavens of storytelling. And, for the most part, these stories cleave to that voice throughout. ``Caprock Rancher'' tells of a 17-year-old who must rescue $20,000 from three toughs who have found it, although it belongs to several poor ranchers back home who've trusted the boy and his father to take their cattle to market. ``Desperate Men'' follows four prisoners who escape from Yuma Prison during an earthquake and flee into the desert with an Army payroll. Their greed is as much against them as the sun. In the title tale, a young man who heads a cattle drive finds wooing a beautiful woman to be more fraught with difficulty (and danger) than life on the trail. And in the superbly burnished novella, ``Rustler Roundup,'' the Laird Valley cattle war pits some smart rustlers, who want to grab Finn Mahone's herd and acres, against an even smarter hero. As ever, L'Amour's characters distinguish themselves from run-of-the- mill westerners by the hard thud of their boots on soil and the worn leather ease of their dialogue. Awesome immediacy, biting as creosote slapped on a fencepost.