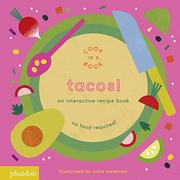 From the Cook in a Book series

More yummy eats for toque-wearing toddlers to dish up.

As in Pancakes! (2016) and Pizza! (2017), Nieminen begins by laying out labeled ingredients and required kitchenware, all reduced to very simple, stylized shapes. She then goes on to offer step-by-step directions for seasoning and sauteing the meat (chicken), chopping veggies (“Real knives are sharp! Always ask an adult for help”), making guacamole, mixing corn and beans (the latter from a can), laying out all the fixings, and finally warming the (soft, premade) tortillas. Each transformation along the way is accomplished by spinning a wheel, pulling a tab, or pulling out a detachable chopping knife. Instructions are minimal—the guac is made by mashing avocado with “other ingredients,” presumably the lime, salt, and cilantro depicted above the bowl—and the note to enlist an adult sous-chef comes after the cooking stage, which seems rather late in the process. More problematically, unlike the previous outings, the payoff here is unsatisfyingly abstract: a big, stiff, chartreuse die-cut disk representing the tortilla gets forcibly folded in half after “toppings” from the previous spread are imaginarily applied.

A generic version of the treat, with barely a hint of its ethnic origins and that’s less a usable recipe than just going through (some of) the motions