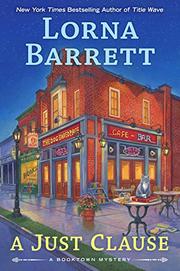 Which would you prefer, a murder investigation or a family crisis? Barrett gives her sister heroines both.

Tricia and Angelica Miles are deeply involved in making the bookish town of Stoneham, New Hampshire, into a premier tourist destination. Tricia owns the Haven't Got a Clue mystery bookstore, and Angelica owns a cafe while secretly investing in new businesses and civic improvements. The two sisters have become very close after years of estrangement caused by their parents’ lopsided favors. When their father, John, shows up at a book signing Tricia’s store is hosting for bestselling author Steven Richardson, Tricia’s darts-playing competitor Carol Talbot mysteriously slaps both men. So when she’s murdered, the two are likely suspects. The last time John was in town, his abrupt departure left Angelica to pay off his debts, and neither daughter wants him around now, especially since his cash-flow problems have tempted him into dishonest schemes. Tricia has a reputation as both an unfortunate finder of bodies and as a sleuth (Title Wave, 2016, etc.), much to the chagrin of former boyfriend and police chief Grant Baker. It turns out that Carol killed someone as a child, and Steven Richardson’s plan to use her past as the basis for a new book forces him and Tricia into a race for the truth. Meanwhile, Tricia and Angelica, hatching a plan to get their estranged parents back together, learn a lot of things about their father’s checkered past they would rather not have known. Given all the family affairs that require her attention, Tricia can barely find time for a murder investigation, even when she finds another body.

Though Barrett’s character-driven series never provides very memorable mysteries, fans who are invested in the lives of the two sisters will welcome this angst-filled installment.