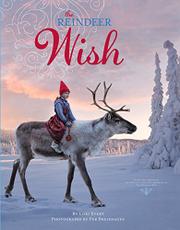 by Lori Evert ; photographed by Per Breiehagen

The creators of The Christmas Wish (2013) and The Tiny Wish (2015) return with their daughter for another extravagantly photographed Nordic adventure.

Only-child Anja is lonely, so she writes weekly letters to Santa asking for a sibling or, preferably, a puppy. Taking a break after skiing one Christmas Eve, she learns from the cardinal that introduced her to Santa Claus the previous year of an abandoned reindeer, which she takes home and names Odin. Together they grow and flourish in the spectacularly beautiful Norwegian countryside. When, one day, Odin tears up while watching a herd of wild reindeer pass, Anja knows it’s time to say goodbye. Rather than set him free, she takes him to Santa to join his “herd of magic reindeer”—and is given a puppy as consolation. While blonde, chubby-cheeked Anja is cute as a button, particularly in her various Norwegian folk costumes, and the countryside is breathtaking, the freshness that marked her first outing has definitely worn off. Too many of the compositions look like photo collages, damaging the verisimilitude, and the syrupy text is both overlong and poorly paced. Exactly how Odin came to be abandoned is never addressed, and Anja’s problematic adoption of this wild creature is skirted.

Committed fans of the first two books may be pleased, but this comes across as more coffee-table self-indulgence on the part of the creators than a picture book with broad child appeal.