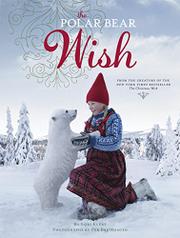 by Lori Evert ; illustrated by Per Breiehagen

Anja and her dog, Birki, do their best to get to a Christmas party in a frozen Nordic landscape.

Anja wishes she had a dog sled to harness Birki to in order to get to the party. The next morning, her cousin Erik appears with his dog sled and an offer to take her there. Lost in a blizzard, they encounter talking wolves who take them to a tent where they can spend the night. A baby polar bear named Tiny appears, separated from his mother. The following day takes them all on an adventure through glaciers and fjords, past an ice castle, and finally to Tiny’s mother and to the party. This digitally produced book is illustrated with photographs that capture the Nordic setting. Unfortunately, the overall effect is weirdly flat, with elements awkwardly set together in images that lack depth. A polar bear perches awkwardly on top of oddly scaled pack ice; Anja and Erik spend a night in the ice castle in niches chiseled into the wall, but they seem oddly disconnected from it. The book has an old-fashioned, European feel; the white, blond children’s red caps and traditional clothing stand out against the dim, bluish winter light. But the wooden, overlong text does little to cultivate the magical fantasy feeling that it’s aiming for.

For fans of Evert and Breiehagen’s Wish Book series.