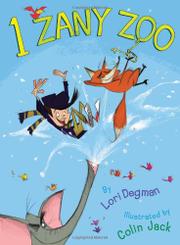 A fearless fox filches keys, and crazy creatures stir up all kinds of mischief. While waiting in line for the zoo to open, a little boy sneaks in, just in time to see the zookeeper’s keys being snatched. He follows the fox, who lets all the animals out of their cages. Then... “2 sporty zebras in goggles and flippers / were snipping the walruses’ whiskers with clippers.” An array of further animal antics unfolds in bouncy verse (full of phonetic Seussian crunch) amid equally antic pictures. There are “4 anxious elephants” packing their trunks but stopped by skunks; “6 groovy ’roos” tapping their shoes, along with hyenas singing rhythm and blues; fickle leopards, pompous peacocks, clever chimps and so on join in the mayhem all the way up to ten. Degman’s verse is bright—this text won the Cheerios New Author Contest—and animator Jack’s digitally produced creatures, both animal and human, are pleasingly Bill Peet–esque. Crackling good fun. (Picture book. 3-6)