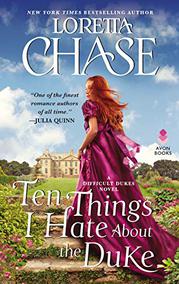 TEN THINGS I HATE ABOUT THE DUKE

A vindication of the rights of shrews.

Lord deGriffith has finally had enough of his bluestocking daughter, Cassandra. After she openly challenges her father's fellow Member of Parliament about a bill she thinks will hurt the poor, he sets a new rule—her beloved sister, Hyacinth, may not marry, or even participate in her first season, until Cassandra herself marries. Frustrated, Cassandra leaves London, where she crosses paths with the notorious Lucius Beckingham, Duke of Ashmont, after her carriage crashes. She was infatuated with Lucius as a young girl but has since lost all patience with his disreputable behavior. As he tries to help Cassandra and her groom, who is badly hurt in the crash, Cassandra finds herself in a difficult position, without an appropriate chaperone, and Lucius—whose fiancee has just run off with one of his friends—offers to marry her. Though years ago this would have pleased Cassandra, and she’s still attracted to him, she no longer trusts the man he’s become—“beautiful, godlike, and hopeless.” Only later, after they are caught in a compromising position, will she agree to a sham engagement to salvage her reputation. Ashmont jumps at the chance to be closer to Cassandra, hoping that before it’s time to break it off, he’ll win her back—and with each day, he comes closer to his goal, with a little help from Mary Wollstonecraft. This book, second in Chase’s Difficult Dukes series, is a typically complex and engaging story from the author, rich with subplots and moments of intrigue. With a hero set on winning his heroine from the start, the suspense is derived primarily from just how far Ashmont will have to go to win back his Cassandra, and readers who like a groveling duke will enjoy his pursuit. Though it’s second in a series, new readers can jump right in, though fans of the first, A Duke in Shining Armor (2017), as well as those familiar with The Taming of the Shrew or Ten Things I Hate About You, will enjoy several subtle touches throughout the book.

A thoroughly satisfying Regency from one of our finest historical romance authors.