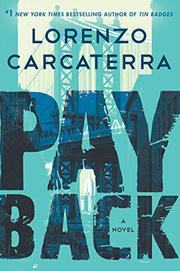 A White ex-cop goes after his brother's killers while attempting to free a Black man put in jail by a crooked cop.

Tank Rizzo is a New York cop on unwanted retirement thanks to an assailant's bullet. He's taken the time to put together what he calls his "team": his teenage nephew, Chris, living with him after losing his parents in a suspicious car crash; his girlfriend, Connie Tramonti; his ex-partner, Frank "Pearl" Monroe, who uses a wheelchair after having been shot at the same time as Tank; Connie's restaurateur father, Carmine Tramonti, a retired mobster; and various other contacts on both sides of the law. Prompted by what his nephew is able to dig up on the internet, Tank comes to believe that the accounting firm his late brother worked for arranged his death and sets out to prove it. As if a white-shoe firm willing to stoop to murder isn't enough of an opponent, Tank also goes after a retired White police detective whose unsurpassed number of closed murder cases had to do with his willingness to pressure young Black men into confessing to crimes they didn't commit. There's something appealing about the idea of a team of cops, feds, lawbreakers, and assorted colorful characters out to use any means they can to secure justice—but that's more the stuff of Jack Reacher–type fantasy than the social realism that characterizes this book. Too often it reads like a cartoon version of what Richard Price has achieved in novels like Clockers and Freedomland. Despite the short, punchy chapters, the book feels padded, full of inflated writing along the lines of "I was a man of action and violence standing in a sun-drenched courtyard seeking solace and wisdom from a man of peace and love." And in too many cases the relationships between characters seem prefab instead of developing as we read.